I kind of like how his original album was more contemplative and atmospheric, but this is a charming, kind of retro-vintage-y turn of styles. In any case he's so super talented! * faint *

I was especially entertained reading this comment thread on the YouTube video. Girls get so sentimental, then tell each other the most irrational things, don't they?

i hate listening to﻿ this song cuz it makes me cry cuz i love thiis guy so much but i doubt he even knows i exisit :(

@xoxoLonging4Youxoxo He'll Know ou SomeDay It Hapeened to me one day i was in love but he didnt even know my name! I﻿ would go up and say hey But hed just keep calling me Amanda Or Brittney Or somthing but my name was jordanna And It soo badly ands thats what hurt the most in my life but now were good friends cuz he acully gets my name right so itll happen to you someday i promise!

@xoxoLonging4Youxoxo﻿ Don't waste your time on a guy who doesn't know you exist... Find someone who thanks God for your existence.

@xoxoLonging4Youxoxo he probly does though he isnt smart enough to realise that yur good for him dont worry. if its meant to work out it will if it﻿ dont dont worry theres sum1 out there who will realise how special yu r

I just really like this song ("Kandi, by One Eskimo).  It's sad and sexy all at the same time.
Did some digging and learned it is sampled off this lovely, soulful rendition of "He Called Me Baby" by Candi Stanton:
Which in turn was a cover of this country song that's been covered within an inch of its life by the likes of Patsy Cline (originally by Harlan Howard), which sounds like a really bad karaoke song:
I definitely think we're making progress.

Maybe you've heard of this pocket-sized girl with a larger-than-life voice, plucked out of obscurity from some backwater Phillippine island and given the most influential patrons a young artist could hope for - David "The Hit Man" Foster and Oprah.  I won't belabor the point; if you're interested you can check out the oodles of YouTube videos tracking Charice's journey from singing local contests in the Phillippines to her dream duets with Andrea Bocelli in Tuscany and Celine Dion in Madison Square Garden.

I wasn't particularly paying attention to her album release, but release it did, a couple months ago, and I just read about Charice joining the Glee cast for season 2, and started poking around the interwebs, and found her first single, which I find impressively well-produced and well-performed.

I also for some reason really love this other song on her album, "In Love So Deep."  Not so terribly deep, despite its name, skirting the edge of bubblegum pop, but somehow it gets under your skin because in reality it's so much richer in emotion than a lot of the vacuous dredge that passes for R&B on the radio these days.  It's great to see Charice older, more confident, trying to find her own style and niche rather than riding coattails and imitating the greats that came before her (Mariah, Celine, Whitney...).  I hope she gets some decent airplay and takes the world by storm!
Oh and um, if you feel like watching the BEST YOUTUBE WEBCAM COVER SONG EVARRR, check out Charice nailing the song by Justin Bieber, "Baby."  She's amazing to watch, especially the part where she raps.  Anerable.

Same goes for most people I guess (meaning, I like them best when earnest, especially if they're usually sassy).  I especially love how "Three Wishes" is a study in sounds.  Wishes, delicious, fishes, blisses, vicious... lover, ever, heavens... it's just such a pleasure to listen to.

We'd be so less fragile

And you want three wishes:
One to fly the heavens
One to swim like fishes
And then one you're saving for a rainy day
If your lover ever takes her love away

You say you want to know her like a lover
And undo her damage, she'll be new again
Soon you'll find that if you try to save her
It will lose her anger
You will never win

And you want three wishes:
You want never bitter
And all delicious
And then one you're saving for a rainy day
If your lover ever takes her love away

You want three wishes:
One to fly the heavens
One to swim like fishes
You want never bitter
And all delicious
And a clean conscience
And all its blisses
You want one true lover with a thousand kisses
You want soft and gentle and never vicious
And then one you're saving for a rainy day
If your lover ever takes her love away

I for some reason cannot stop watching/listening to this video.  Something about the black-and-white, the measured pacing, the echo-y stairwell, the heartachingly good harmonizing.

Lord these girls are gorgeous.  I would be happy to have a trio of daughters who sing like angels, as the Grannis sisters do.  And I have to agree with vchu that the most captivating one is Misa, the shy bookish-looking one on the left.
And the original "God in My Bed" by K's Choice, for comparison.  Personally I prefer the Grannis sisters' rendition.

This girl is so talented.  And gorgeous.  I'm so totally in love.  But you may have already known that - I blogged about her back in September.   It's certainly interesting to hear the fully produced versions of the songs she first played on YouTube.  In some cases I think I prefer the rough versions. 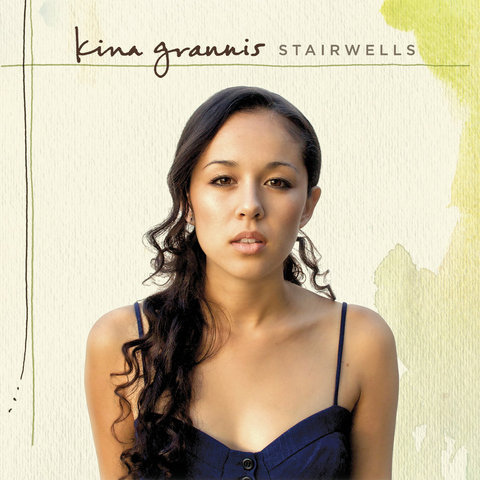 Here's the official video for her single, "Valentine":

Incidentally I wonder how Don Hertzfeldt feels about her borrowing the concept from his 1995 animated short:

Somehow 20+ mediocre songs (with apologies to Misses Gaga and Swift, who are perfect in every which way) come together to make one wondrously joyous anthem.  Just heard it on the radio for the first time and I just wanted it to go on, and on, and on.

My friend Lily forwarded me this clip of Lady Gaga performing 'Captivated' and 'Electric Kiss,' two rather lowkey original songs she wrote and performed for a student audience at NYU.  This should answer any question her naysayers may have regarding her incredible talent.

And for us fans, it re-affirms why we loved her in the first place.  Without all the crazy costumes, makeup and sexified style, her rich voice and freshness still shine through.  It's no wonder she revolutionized pop music last year!  I like how at the very end, one of the judges says, "Norah Jones, look out!"  Hahaha. Little did she know that Stefani had bigger dreams than taking out little Miss Norah Jones.
In contrast, check out her latest video for 'Bad Romance,' which is a theatrical wonder. (In case you've been living under a rock and haven't seen it yet.)
Browse the Archive »